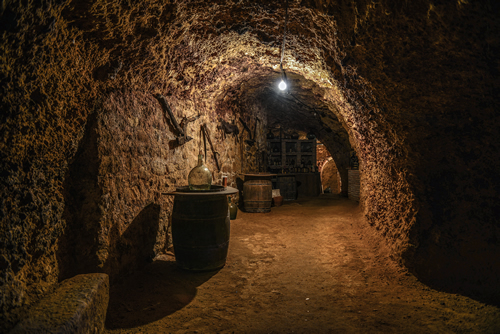 Once Spain was unified in the 16th century under the Absolutism of the Catholic Monarchs, Laguardia lost its meaning as a stronghold and no battles were waged here for a very long time. Its inhabitants enjoyed a peaceful period of time that brought splendour and richness to the town, thanks to the wine industry and to the important families that settled down in the place. This prosperity can be appreciated, above all, in the new palace-like constructions.

The “caves” or family wine cellars, so characteristic of Laguardia, were made during that century.

Almost the whole town could be walked along in these underground corridors that make up the cellars. Each house has its own cellar deep in the ground; the size of the cellar is not proportionally related to the size of the house it belongs to, so there are huge houses with small cellars and vice versa. Their main function is keeping and preserving the wine in the most favourable conditions, although for some time in history they may have been used as shelter or military quarters where conspiracy took place and war drafts were made.

At the end of the 17th century all this area was swept by an epidemic plague. The first news we have about this sorrowful event dates back to the year 1564, but afterwards some severe relapses of the illness appeared and decimated the population. This also meant the end for some adjacent villages.