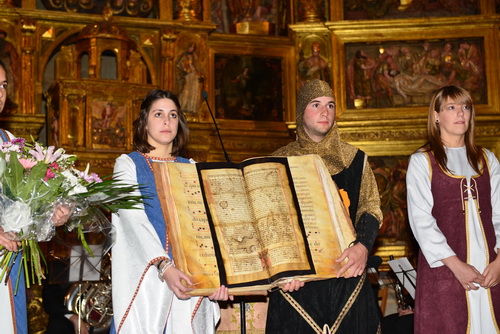 In the 10 th century, probably in the year 908, Sancho Abarca, the king of Navarre, constructed a castle on the north of the hill, which overlooked the whole region of the present Rioja Alavesa. Its function was guarding and defending Navarre, besieged by Moors and Castilians from time to time.

Thus, Laguardia was born with a strong military function, as an answer to the warlike temper of his founder and to the particular defensive mission that was assigned to the town by the kings. These factors have made up its character and history.

The castle of Laguardia, about which a lot of authors have written, was a very important one in the Kingdom of Navarre from the 13 th to the 15 th centuries, due to its frontier location. It stood up until 1875, when it was pulled down to carry out alleged town improvements.

This castle must have been one of the most beautiful in the area and was the residence of the kings of Navarre on many occasions. To all appearances, Doña Blanca of Navarre was born within its walls and she got married to Don Sancho “El Deseado” (Sancho “the desired”) of Castile in this castle in 1150.

In the year 1164, “Sancho VI”, Doña Blanca's brother, granted a charter of privilege, thus bestowing the rank of town to Laguardia, making its inhabitants free people and granting them several privileges:

These privileges were universal to all the inhabitants and were extended to the villagers that were under his jurisdiction.

The granting of this charter meant a big increase of the population, since traders and craftsmen were appealed by the privileges granted to the dwellers of Laguardia, and they thrived on the hill, under the shelter of the military castle. They built houses and widened the town, the cultivation of the fields began, new villages appeared around Laguardia and some old ones were repopulated.