Day of the Piper 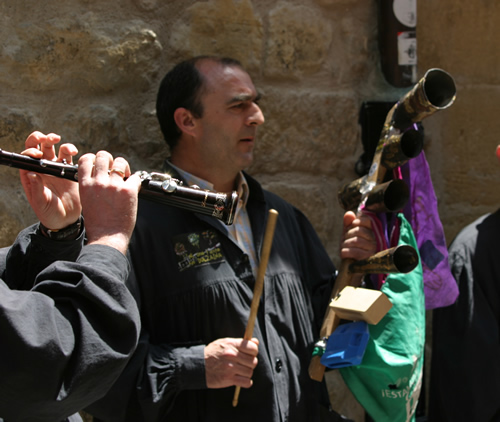 On May we celebrate one of the most popular festivals of Laguardia: Día del Gaitero, or Day of the Piper. Despite this festival giving birth to the homage to Don Jesús Martínez (Jimeleo), a top bagpipe player in Laguardia, it has become a festival increasing in popularity every year.

We must not forget that Laguardia has been the birth place of many bagpipe and flageolet players, of which the town, with its medieval flavour, makes up the perfect backdrop for the sounds of this instrument to pass through the streets.

It is attended by bagpipe players from around the world. Concerts, dance festivals, composition and work recuperation contests, reveilles, parades... are all some of the activities enjoyed during this busy day.

Traditional music and dances within the folklore of Alava are practically unknown by its inhabitants. It is not because they are scarce; the reason for this is the lack of study, description and research on these traditions.

Its written documentary is also scarce, practically non-existent for traditions older than thirty years. The transmission of the folklore has always been oral; the only written material that has remained is some musical scores of pipers' repertoires, which are nothing but small notes.

Every particular dance was performed on a specific day and only on that day, with a very low frequency, once a year at the highest. The dance is “property” of the town, as a matter of habit , not of birth. It is not popular outside and the only carrier is the piper.

In most cases the dance is performed by young people, who are replaced every year or when they reach certain age. Thus the introduction of new elements and the modification of the existing ones may occur.

Another factor is the present tendency of the young people from Alava to migrate from rural to urban areas, which makes the population of these rural areas old and the performance of the dances more and more rare. But this is not the case of Laguardia since it has a bigger population and it is a county town. Besides the presence of pipers assure the survival of its tradition.

They are played by the pipers, who have carried out a thorough research on the traditional music of the area. Some dances are still performed on exact days: these are the most popular ones:

These “pasacalles” are melodies used by the groups of dancers to pick up the mayor and the youngest town councillor and go along with them up to the town square, to share out bunches of flowers or to go together up to the church.

The Banner is waived with rhythmic movements. It is related to the March of San Ignacio (Saint Ignatius).

Everybody can take part in this typical dance, making up a big circle.All these dances belong to the folklore of Laguardia.Nowadays, some of them are performed for several reasons