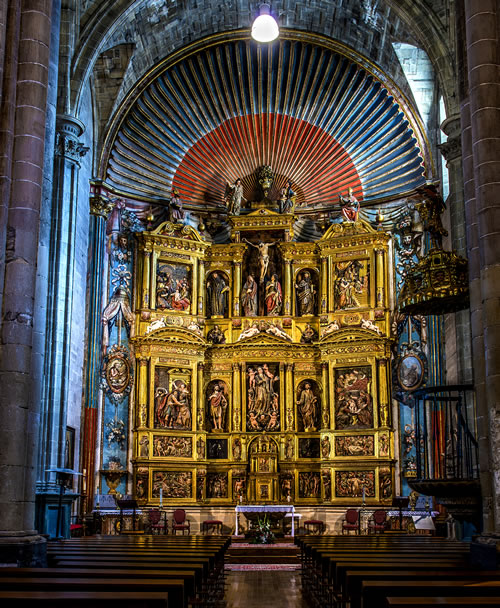 It is located at the north of the town and it shelters the streets from the cold winds coming from the mountains of Cantabria. The width of this church is the same as that of the three longitudinal streets of Laguardia altogether: calle Páganos at the west side, calle Santa Engracia at the east side and calle Mayor at the centre of the town. Walking up the latter one you can get to the front door of the church.

The temple has a rectangular floor plan with three longitudinal naves that are divided by pillars. It also has a transept (which is longer than the church itself, since it has two chapels at both ends) and an apse that is semicircular inwards and polygonal outwards. Next to the Apse, on the side where the Epistolary is read, we find the vestry, of Renaissance style, added in 1549 when the Gothic Sanctuary ending in three Apses was demolished and the construction was finished such as we can see it nowadays.

There are Gothic vaults with tiercerons covering the naves, whereas the central part of the transept has a Renaissance coffered vault with images, among which the wall relief of “El Padre Eterno” (The Eternal Father) stands out. The other two parts of the transept have Gothic vaults built in trapezoidal segments, resulting in star-shaped vaults with very big Renaissance key stones.

We can speak of several building periods since the finishing of the temple took a really long time and every architectural change made the mark of the style that was predominant at that time.

The first artistic traces are located at the north and northeast parts at the outside of the church. They are the walls that can be seen from the school yard. Here we find small walled up arches and Lombard fascians that decorate the top of the wall. They date from the 12th century, when the building was started in the Romanesque style of those times.

The Romanesque style of Santa María de los Reyes was preserved at the end of the 12th century and during the following one, which left its sign on the western wall, opposite the Torre Abacial (Abbot's Tower). This wall is at the foot of the temple and underwent a major architectural change at the beginning of the second half of the 20th century.

Here we can see two transitional Romanesque windows, which were completely restored and rebuilt.

We can also see a Gothic door at the northwest end of the left wall; this door is walled up in the inside and it is made up several archivolts that stem from round columns topped by capitals with plant motifs. There is a small pentice over these archivolts and it is held by corvels that are also decorated with plant motifs and anthropomorphic figures.

At the foot of the nave, under the choir, there is a new door with semicircular arches, and topped by two thick pilasters serving as buttresses and dating from the rebuilding that was carried out in 1954.

During the Gothic period (13th to 15th centuries), the temple was enlarged with new constructions that followed the style of each century. 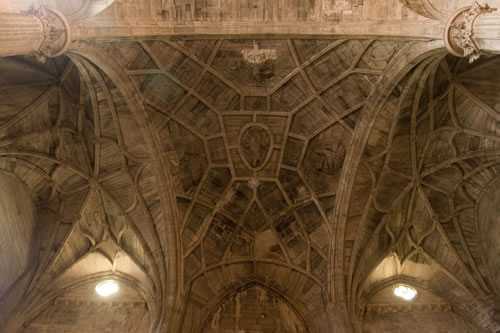 At the beginning of the Gothic period the height of the temple was raised and the burial arches were made. Later on, in the 14th century some architectural changes were introduced, such as ribbed vaults with tercierons, and some working was made on the central columns. This period witnessed the most important architectural change that took place in the temple: the front façade leading to the inside of the church.

The sanctuary of the temple was demolished around the middle of the 16th century and it was enlarged. This meant the widening and transformation of a part of the transept and the apse. This architectural change was carried out in Renaissance style.

The change also included the making of the present apse, which is octagonal outwards and semicircular inwards. A part of the crossing vaults, mainly the middle segment was also made at this time together with the widening of the vestry at the southeast of the apse.

Once the apse was finished Juan de Bacardo was able to begin the making of the “Retablo Mayor” (the main reredos) It was an artistic rebirth where we can see the mannerist style and the Baroque art that begins to be influenced by the new artistic fashion coming from abroad.