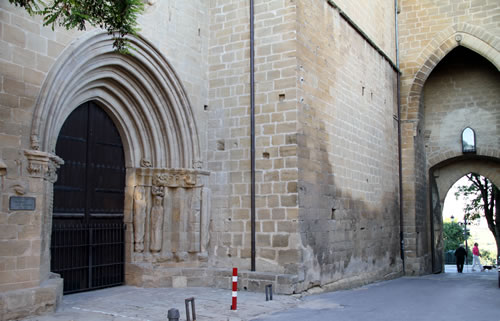 It has five beaded archivolts. Pointed arches inside, with an almost rounded exterior.

Two columns remain on the left nowadays, whose shafts are completely sculptured: one with palm leaves and the other one with flowers forming square patterns. The capitals of these columns show the transition towards the Gothic style. Here there are sculptured animals, intertwined with tree branches.

On the right there are two statues representing the “Annunciation”, the Angel and the Virgin. They are two beautiful images, above all that of the Virgin, with more thorough, painstaking details, although they are smaller to make room for two angels over the Virgin's head crowning her.

The capitals on the right are fully Romanesque. The capital of the statue of the Virgin represents her “Dormition”. Two winged angels are holding her shrouded body whereas Jesus, with a venerable look, is taking her soul away, symbolised by a little girl.

It is decorated, both outside and inside, with small figures. Inside, it appears embedded into a deep arch of a thick wall.

The making of the town walls meant the building of the Gothic part of this church in such a way as we can see it nowadays.

The church is a part of the fortified enclosure and due to its location it was intended to defend one of the most accessible ways into the town. Therefore it was organised to adapt itself to the space and to the double mission that it was intended to fulfil.

The church of “San Juan”, the walls and the large fortified tower are a constructional unit. This factor shows that they are contemporaneous with each other and they were devised as a temple-fortress for the defence of the southwest side of the enclosure.