Fortification of the town 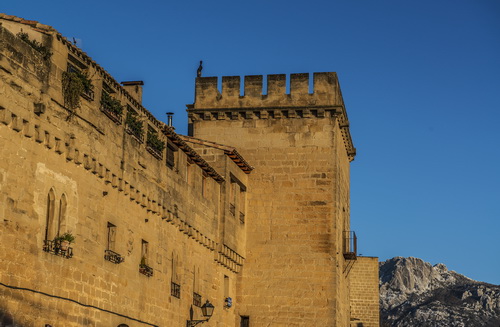 Sancho VII “el Fuerte” (the strong) (1194-1234) decided to fortify not only the castle but the whole town and make it a stronghold and an impregnable bastion. This fortification must have been comprised the whole walls that, starting from Sancho Abarca's castle, surrounded all the town.

High and strong, at intervals, at a concrete distance from each other, some big square towers stood out from the walls, decorated with battlements and loopholes.

Laguardia remains marked by its military function, in such a way that its central area consists of three longitudinal streets that, in their turn, are crossed by three small side lanes. There are two other lanes that are parallel to the “Calle Mayor” (“High Street”) and another side lane that links the Mayor and Páganos streets; and there is a rectangular square in the middle of the town. All is surrounded with a walled enclosure.

This wall was open to the outside through four gates.

Due to the defensive role and to the military character of this town, which was often involved in military conflicts against different kingdoms, the inhabitants divided themselves into borough organizations with a civil-military character eyeweardock. They were in charge of defending the walls that surrounded the town. 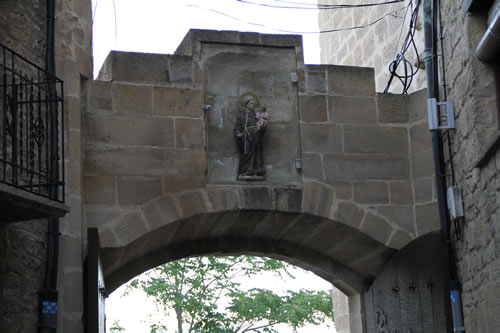 In the beginning there were four of them and each one was dedicated to a Saint.

Nowadays there are still ornamental shelves over the gates of Laguardia, as a memory of the brotherhoods devoted to those saints, which hold images of them.

Later on more brotherhoods were created and each one wanted to have its own image. So, we can also find these ornamental shelves in some of the streets inside the walls.

The only image that remains from those times is that of “San Antonio Abad” (Saint Anthony the Abbot), restored a short time ago, which belongs to the 13 th century.