The best way to know the historical profile of a place is by looking at its folklore and traditions. They make up its cultural richness. It is necessary to look at the past so as to understand the present.

A lot of these traditions have been forgotten. We will deal with the most representative ones; some of them are rising up again, thanks to the people's efforts and interest. The following ones are worthwhile:

The Nativity scene of Saint Mary 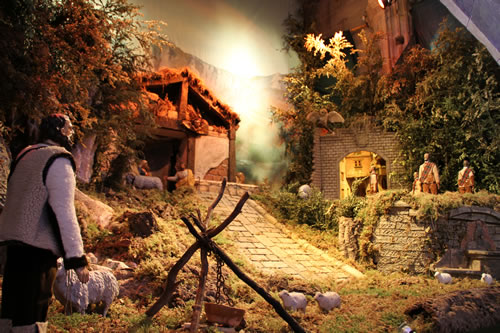 It takes place at the church of “Santa María” in the chapel of “La Inmaculada” (The Immaculate Virgin) on a stage surrounded with pine and box tree branches; the background is a canvas with the picture of the Cantabrian Mountains and, in front of it, the scene of the Virgin with Saint Peter and the Infant Jesus in the crib is staged. The figures are made of fabric, wood and leather, and they are articulate.

During the Christmas festivities, after the Misa Mayor (the High Mass), these figures play several moments of the birth and life of the Infant Jesus. The shepherds dance to the sound of the carols, moving their arms and legs, turning around and hitting each other gently, whereas the rams butt into each other ringing their bells. On the first of January the “Presentation of the Infant Jesus at the Temple” is staged and the “Adoration of the Infant Jesus by the three Kings” is on the sixth of January. After the Christmas festivities the “Getting away from Egypt” is staged on the first Sunday of February. It is a combination of a biblical account and a legend.

In 1749 the first mention is made of the nativity altarpiece.

The polychrome wood sculptures that make up the “Mystery” are designed to present the traditional nativity scene, and are immobile; this forced them to redo Maria’s arms to adapt her to the mobile scenes that must have started later. So we can deduce that these pieces were made for the Nativity altarpiece placed in the Santa Maria parish in the mid 18th century.

The “Nativity Altarpiece” in the church since at least 1749, was reformed and probably expanded by Domingo Bustero in 1767. After this date the Christmas scene kept its symbolic values of the traditional nativity scene as well as including mobile parts to represent the key passages of baby Jesus´s life.

Currently the nativity scene is made up of 73 pieces, of which the majority are rococo.

The curtain currently on display was painted in 1987 by the Vitorian mural artist Jesus Crespo San Vicente.

These are the bagpipe players that play for the nativity scene, but in other times they were first a Music Chapel, the parish’s choir and probably at some time the town’s music band.