The Carlists Wars left a dismantled town; the castle doesn't exist any more and the town walls have been abated in a considerable way… but the ups and downs of history could not get the town to lose those splendid, stately airs, so characteristic to it.

The 20 th century began and Laguardia got over little by little. 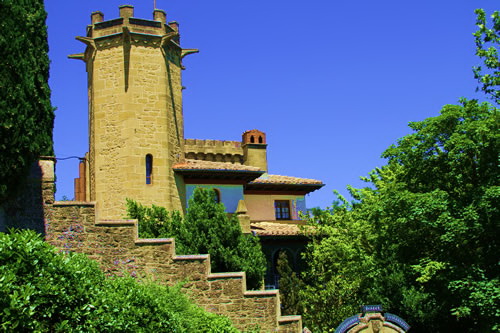 Year 1920: Opening of the Hospital of “San Raimundo”. It was created to take in the ill people of the area, during the times when travelling up to the nearest cities was difficult. Its function changed when communications improved; it began to take in bronquitic people from the Basque Country and later it took in children from Alava. Nowadays it is used for the teaching of high school and vocational training students, both from Laguardia and its environs.

In 1927 the town schools were open, located in the spot where the castle stood before and they are still attended by the children from Laguardia and from nearby villages.

In 1932 Victor Tapia's house was built on the “Paseo de El Collado”.

The civil war destroyed a big part of Spain from the years 1936 to 1939 and it also hit Laguardia. After some hard post-war years, from the seventies on, Laguardia has experienced a big development and expansion: plenty of wine cellars were built around the town together with sports facilities, the public walks of the towns were repaired and the “Casa del vino” (“House of Wine”) was open. Little by little Laguardia became what it is like nowadays.

Laguardia is a charming town and, together with its splendorous landscapes covered with vineyards, it keeps, engraved in its stones, the memory of the people who, from ancient times, lived, fought and died; and with it they helped make our history.