The first piece of art we can see inside the church is the extraordinary front of “La Virgen de los Reyes” (The Kings' Virgin) whose building, made of sculptured stone, dates from the end of the 14th century, although its polychromy belongs to the end of the 17th century..

It is made of stone and it consists of a double Gothic arch that is sharply pointed, forming five archivolts, all of them profusely decorated.

Here some human figures (Virgins, prophets, martyrs, kings, angels) appear together with plant motifs. The first archivolt is decorated with angels playing musical instruments as an accompaniment to the scenes that make up the tympanum; above all to the one that represents “The Last Supper” right under the keystone of the arch. The next scene is made up of intertwined plant motifs together with prophets and kings, and it is topped by the widening of the front façade.

All the figures are standing and covered by a beautiful small canopy which, in its turn, is the leaning point of the figure that is right over it. The small canopies are decorated with fine thin gables and openwork ornamentation.

The jambs form widening outwards, and are decorated with six apostles that are slightly bigger than life-size. They are sculptured in a very fine way and are a little more elongated than usual, with the intention of evocating spiritual highness.

They are in a front position although some heads are slightly tilted trying to appear more natural. The tunics covering the bodies show very natural folds. This aspect is enhanced by their facial gestures; all of them are bearded and look very natural, with a hair style that suits perfectly. 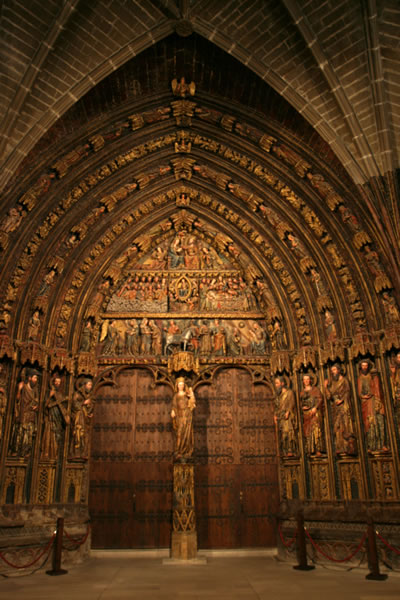 They are all holding a book and an object that makes each one different from the rest (San Pedro with the keys, Santiago with his pilgrim's staff and scallop etc.)

All the images are standing on pedestals that are profusely decorated with gables showing some figures of animals, monsters etc. The top is covered with a wonderfully decorated canopy, in the same way as the figures at the archivolts.

The image of “La Virgen de los Reyes” has an outstanding position among the twelve apostles and it is located at the mullion of the double door leading into the temple. This sculpture rests on a high pedestal and from here it presides over the whole scene at the front façade.

The sculpture is very well made and has a fine finish. It is standing and holding the figure of the Infant on her left arm, with her head slightly tilted towards him, trying to create a motherly scene in which the Mother and the Infant are speaking to each other in a casual way. The figure is a little foreshortened right above the Infant's waist in order to counterbalance his weight and, in this way, it appears in a perfect position.

At the sides there is a double door, topped by segmental trefoil arches that are decorated at the spandrels, with openwork ornamentation between the lobes. These arches are the base of the tympanum, which tops the front façade and completes this piece of art.

The tympanum is divided into three horizontal fascians that are profusely decorated with continuous relief work, representing scenes of the life of Jesus and the Virgin: Annunciation, Visitation, Epiphany, Dormition etc.

The finishing touch is the scene of the Virgin's Coronation; it is the only scene at the upper fascia of the tympanum.

It's worth mentioning the polychromy that covers the images at the front façade. It is perfectly preserved since it is sheltered from the weather. This polychromy was applied after the making of the façade between 1696 and 1700.

The vault covering this chapel dates from the 16th century and it is star-shaped and built with Mudejar keystones.

Guided tours of the Santa María de los Reyes church, which houses the polychrome portico, are organised at the Laguardia Tourism Office.

The tour includes a light show called “The Portico of Light” projected onto the portico and an educational talk about the church.

Duration: About thirty minutes.
Flat rate: 4 € per person. / Reduced rate: 2,5 € per person.
Reservations: Due to limited capacity, visits should be reserved in advance

Visiting hours may be interrupted by worship ceremonies.