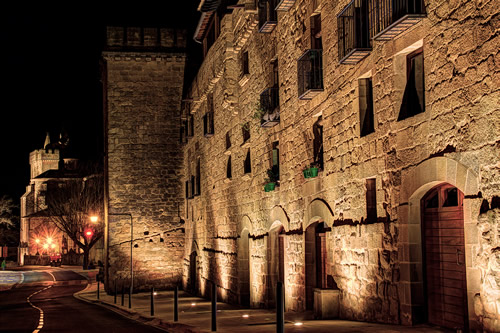 Laguardia became a military fortress again. Its strategic location turned the town into the setting of battles again. During the war for Independence the French occupied and looted it.

In the year 1809 the Marques of Barriolucio took over Laguardia and ordered to destroy a big part of the town walls so as to prevent the French from entrenching themselves inside the town, in case they conquered it again.

During the first Carlist War its towers and town walls were abated in order to build some defences in front of the gates of the town, as a protection from the attacks of the Carlists.

The biggest destruction of the fortress took place during the last Carlist War. They destroyed some houses in the “Rua Mayor” (Main Street) of Peralta and in “Páganos” Street, and a big part of the town walls.

In 1874 the Carlists decided to destroy the fortress of Laguardia and made it an open town, with no military defences. In spite of the villagers' opposition the demolition was carried out.

The only remains of that impregnable stronghold of the Navarrese Kings are two towers, made into bell towers, a few small towers and some parts of the old town walls.