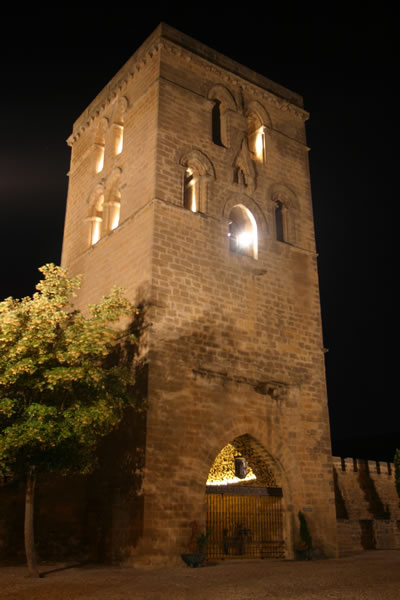 It's worth mentioning the detached bell tower at the foot of the temple.

It's an old castle that was used for the protection of the town walls, on the west side, behind the big castle and its towers, which defended the north side of the town. It has a square floor plan following the style of those that were built in the Catalonian Pyrenees at the beginning of the Romanesque.

It's building and style can be divided into two periods.

The first one is of transitional Romanesque (end of the 12 th century and beginning of the following one). The coupled windows and the arch on the east front belong to this period. The image of El Salvador (The Saviour) is present at the spandrels of the upper windows on the east side, with Romanesque features. It is likely to have been brought from another construction.

The second period dates from the 13th to 14th centuries. And it is present in the windows of the first floor and in the image of San Benito (Saint Benedict), which is over the east balcony, embedded in a sharply pointed gable; it ends up in a rosette.

This tower is thought to have belonged to a monastery (hence the image of San Benito) and it was called Torre Abacial (Abbot's tower) for a long time.

There is a big tank to be filled with rain in order to provide the inhabitants of the town with this precious water.