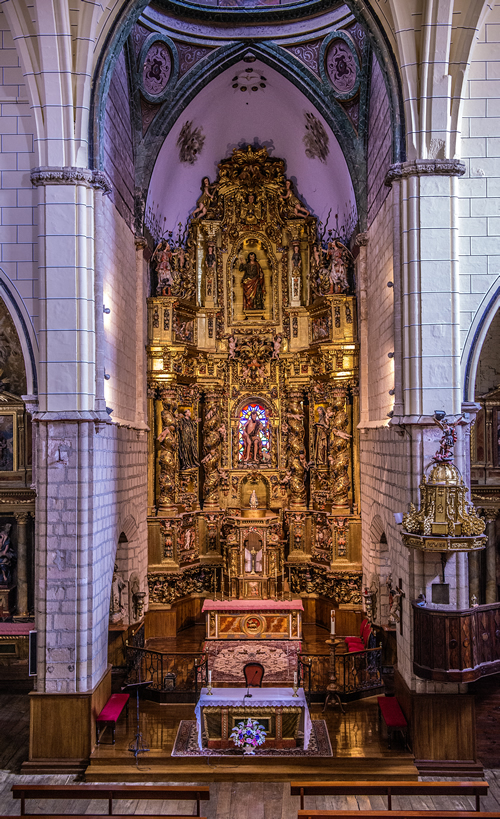 They are decorated in a simple way with pointed arches and ribbed vaults, all plain and simple except the one in the baptistery of the chapel and the one in the choir, which are star-shaped. The Saviour and the Evangelists decorate the keystones of the latter vault.

They are also of this period and their height varies, depending on the nave they belong to. They are made up of two segments: one is straight and covered with simple ribbed vaulting and the other one is polygonal outwards and circular inwards, with eye-catching vaults.

The central apse, above all, is badly damaged by all the works that took place afterwards.

At the end of the 18th the present reredos was placed here, the vault in the back is covered, blocking the three Gothic windows that can be seen from outside. As the light in the main chapel was very dim the vault of the first straight segment was split and a hemispherical cupola was built, and on top of it a lantern with windows was made too.

The sides of the church were as badly damaged as the central apse in 1790.

A window with a pointed arch and a double archivolt stands out at the back of the right arm of the transept.

Next to the Romanesque south porch, there is a rose window that casts light on the right arm of the choir.

At the foot of the temple there is another rose window that decorated the former front door and was walled up when the chapel of “Nuestra Señora del Pilar” was built. It has a diameter of about 3.40 metres. Three concentric circles, the ones inside are formed by beat staffs and the one outside by quatrefoil flowers. The rose window is made up of a group of quatrefoil circles. This quatrefoil decoration is the same as the one at the “Oculo” of the south door and at the sides of the mullion where the Virgin of “El Pilar” is; and they date approximately from the same period.

The choir of the nave is Gothic, from the end of the 15th century and was modified in the 18th century at its balustrade. At the start of the central arch there are some embedded Gothic elements; they are rare nice relief pieces. On the right there is a mermaid combing her hair, a monkey playing a drum and on the left there is a dragon.

It has a star-shaped vault. There is a shining sun on the central keystone, with the image of a woman's face, and there are some angels on the stones next to the central one.