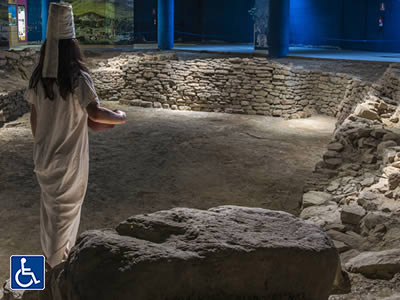 An archaeological intervention into this plot in 1998, led by I. Pereda García, uncovered the discovery of this pond’s structure, shrouded by some powerful layers of earth and rubble from different eras.

The pond was constructed 2100 years ago to collect the waters of a spring which emerged at an altitude of 800 metres, at the top of the hill where the town of Laguardia developed. The inhabitants exploited the layers of subsoil to erect irregularly-cut, dry stone walls on it. There are several low walls that overlay one another and indicate the different expanses of surface intended for collecting water, and in some cases, there appear to have been repairs and reinforcements made to the structures. The general shape of the reservoir is irregular, although the central part is almost rectangular. It has maximum measurements of around 18x15 metres, with perimeter walls at a height ranging from 0.85 to 3.10 metres. The estimated total surface area is 218m², of which 126m² relates to the lower vessel and 92m² to the upper one.

This water collection point, with a storage capacity of 300,000 litres, guaranteed the supply to the population that had settled in this place. Furthermore, it is presumed this pond was a place for ritual functions, taking into account some of the findings revealed during the archaeological intervention, such as the discovery of a Roman altar, close to the pond, dedicated to the Matres, of clear Celtic roots, which we associate with minero-medicinal or thermal springs, or aquifers.

Who constructed this pond?

When the people from the nearby settlement of La Hoya abandoned the place where they had lived during the first millennium BC, they moved to this hill which provided them with the best guarantees of defence. Here, they created a new settlement, that is in the process of being identified, under the houses of Laguardia. It was these people, of Celtiberian character, who constructed the pond, which must have been built and been in full use during the III and II centuries BC.

Next to the pond, a lone museum piece based on an original idea helps convey the importance of this hydraulic structure and the life of the people who benefitted from this aquifer over the course of the centuries. Advanced audio-visual resources, graphic and textual information, along with items related to each one of the eras, allow us to be transported to other times.